Hit enter to search or ESC to close

The shipping sector emits over 1 Billion tonnes of CO2 a year – more than all but the top five biggest country emitters. As such, it is one of the biggest drivers of climate change.

Member states of the UN’s International Maritime Organisation (IMO) must decide this week, November 16-20, whether to accept or reject a proposal called “J/5.rev1” that will allow this giant flow of emissions into the atmosphere to keep growing for another decade or more.

The obvious question then is – wouldn’t that violate countries commitments to reduce greenhouse gas emissions under the Paris Agreement?

It is sometimes claimed that shipping is “not included in the Paris Agreement” – but this is not true.

The commitment to pursue efforts for 1.5°C compatible emissions reduction does not have a clause saying “except in the shipping sector”.

Secondly – countries have specifically committed to align the shipping sector with the Paris Agreement. Member states at the IMO agreed a ground-breaking Initial Strategy to decarbonise the global shipping sector in 2018. As well as goals for the sector to at least halve emissions by 2050, and to reduce carbon intensity by 40% by 2030, (both versus a 2008 benchmark) there were three key short-term goals included the Initial Strategy, to kick-start action in the sector.

3.1.3 “to peak GHG emissions from international shipping as soon as possible”,

3.1.3 “a pathway of CO2 emissions reduction consistent with the Paris Agreement temperature goals”

4.2 to prioritize short term measures “with a view to achieve further reduction of GHG emissions from international shipping before 2023”

So what is a pathway of CO2 reduction consistent with the Paris Agreement temperature goals? Climate scientists answered that last year, in the IPCC’s Special Report on 1.5 degrees. This explained that limiting global temperature rise to 1.5 required global emissions to be almost halved by 2030.

Allowing shipping, the 6th biggest emitter of GHGs, to keep growing its emissions until 2030 and beyond is therefore in plain contradiction with efforts to achieve the Paris Agreement temperature goals. 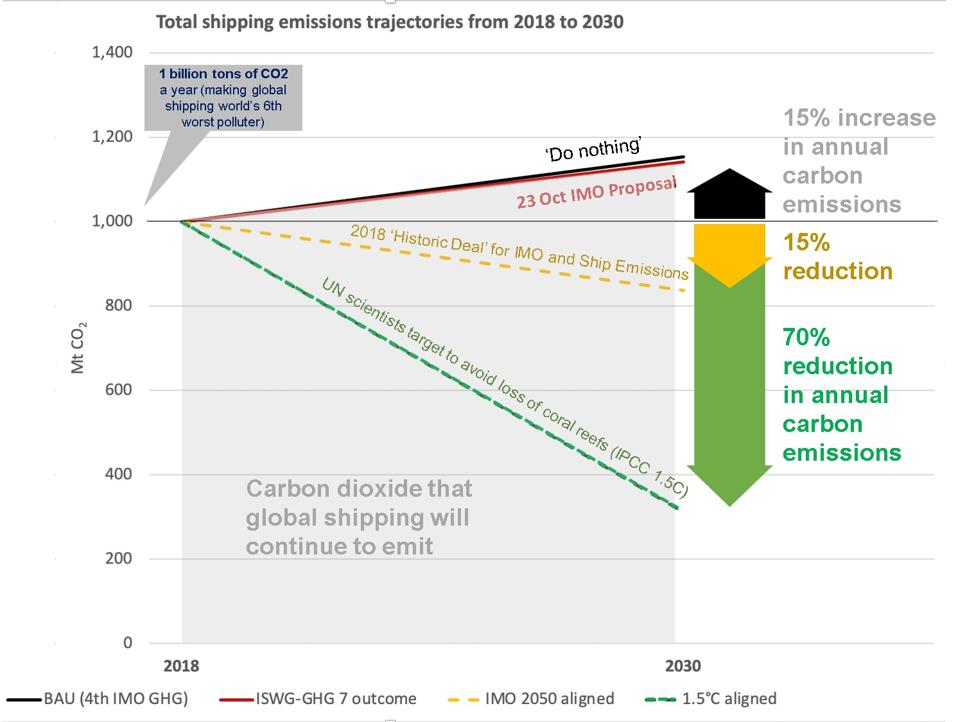 On the other hand as shown by the green line, the Paris Agreement’s 1.5 degrees goal requires steep, outright reductions in global emissions over this same decade.

Clearly if IMO adopts J/5.rev1, it has decided shipping is simply not contributing to the global community’s efforts to reduce emissions and stabilise global temperature rise at safe levels.

This does leave individual country delegations at IMO open to all sorts of legal challenges in future: activists and lawyers may well ask – why did you support adoption of a policy that violated your own country’s commitments under the Paris Agreement, and put your own citizens at risk?

A better approach might be simply to reject J/5.rev1, as a violation of both the Paris Agreement, and the three key parts of the IMO’s own Initial Strategy, as described above.

One the Biden Administration in the US is up and running by June 2021 at MEPC76, and the net-zero announcements by the leaders of China, Japan and Korea have been translated into specific policy actions for shipping, the world may be in a much clearer place on the policy approach needed in this sector.

A Paris-compliant shipping sector would probably need some combination of enforced Carbon Intensity targets (of about 70% to 80% improvement in carbon intensity by 2030), and a tougher

Add in a transparent, public ratings system for all ship’s efficiency (based on China’s A-E rating system) and some serious incentives for new fuel types like green hydrogen and ammonia, and shipping can become a leader, not a laggard, in protecting a safe climate for all under the Paris Agreement.

Any cookies that may not be particularly necessary for the website to function and is used specifically to collect user personal data via analytics, ads, other embedded contents are termed as non-necessary cookies. It is mandatory to procure user consent prior to running these cookies on your website.